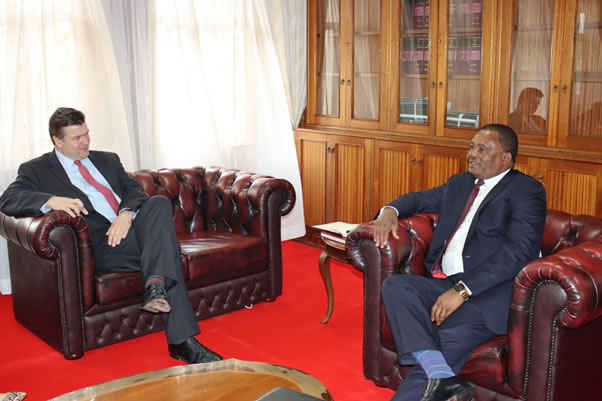 Attorney General J.B. Muturi has Thursday morning held discussions with the British Minister of State in the Ministry of Defence (Minister for Armed Forces and Veterans) Mr. James Heappey.

Accompanied by the British High Commissioner to Kenya, Ms. Jane Marriot, Mr. Heappey commended the cordial relations between the two countries highlighting the importance of the rule of law and respect for the justice system existing in the resolution of matters of national concern.

During the deliberations, critical issues on the protection and sanctity of private property as well as the Defense Cooperation Agreements between the two countries were discussed.

The Attorney General confirmed that Kenya remained governed by the respect for the rule of law and independence of its institutions. Mr. Muturi reassured the British government officials of the government’s commitment towards strengthening security in the country for all.

On the issue of security, it was noted that the Defense Cooperation Agreements signed in July 2021 between the two countries seeking to strengthening Kenya’s security capacity along the Kenya borders as well as maritime security would be reviewed. The Agreements also relate to joint security operations including trainings.

On the issue of the death penalty, the AG confirmed that despite its abolition through the Supreme Court ruling in the case of Francis Karioko Muratetu & another versus the Republic of Kenya, death penalty remained in the country’s Penal Code and it was only a matter of time before it was effectively removed.

The UK Minister reassured Kenya the United Kingdom government was reviewing amongst other things, the culture and behavior of its troops while on training in the country. This comes in light of the on-going investigations into the death of Ms. Agnes Wanjiru in 2012 in the hands of British troops in Nanyuki. It was observed that the death of the Ms. Wanjiru continued to blight the relations between the two countries and there was urgent need to complete the investigations.